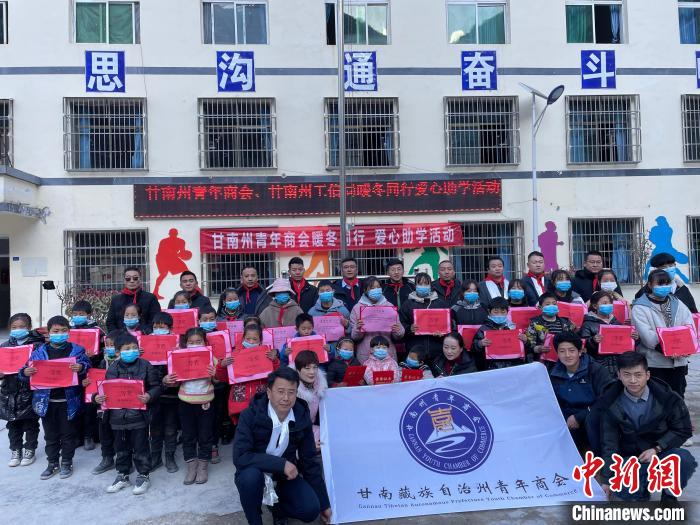 The picture shows Suonam Cairang (middle) discussing and exchanging work with the team. (Data map) Photo provided by the interviewee

Chinanews.com, Lanzhou, January 8th (Shi Jingjing) “From the initial venture ‘Xiaobai’ to now owning a company, I have been moving forward and never giving up.” Recalling his entrepreneurial process, the “post-90s” Tibetan “creator” “Guest” Suonanmu made me feel deeply.

Suonan Mu Cairang is a native of Niba Village, Niba Town, Zhuoni County, Gannan Tibetan Autonomous Prefecture, Gansu Province. After graduating from a university in Chongqing, this outstanding Tibetan student from Shangougou gave up the opportunity to stay in school to work and returned to his hometown to start a business.

Suonanmu Cairang, who has a dream of starting a business, knows the truth that “you can’t swim if you stand on the shore”, so he went to the local Internet company and taxation company to learn. Hard work pays off. In 2017, he was selected by the project manager of a Fortune 500 company and decided to invest in him to establish a technology company in Gannan to make up for the shortcomings and deficiencies in the development of network informatization and technology in Gannan.

Since then, Suonanmu started his entrepreneurial career.

He and his partners went to the Alibaba Silk Road Headquarters in Xi’an for exchanges and docking. After continuous efforts, he finally obtained the authorization of “Dingding Gannan Tibetan Autonomous Prefecture Regional Service Provider” and became the first Alibaba cooperative service provider in Gannan Prefecture.

“At the beginning of our business, we encountered a lot of resistance and setbacks, most of which were conceptual incomprehensions. At that time, people were more accustomed to manual accounting and manual reporting, and worried that the follow-up charges for electronic products would be expensive.” Suonanmu Cai let It is believed that traditional data is not connected, and management is very difficult, and it is imperative to seize the “outlet” of new business formats.

“With perseverance, gold and stone can be carved.” Suonan Mu Cairang, who has a special liking for “digital work”, led his team members all the way forward to develop business in seven counties and one city in Gannan Prefecture. Now, he has become a locally recognized “data expert”.

“Government support and support are crucial to innovation and entrepreneurship.” Suonan Mu Cairang said that the country and governments at all levels have introduced many preferential policies for small and micro enterprises. With the support and help of the local government, the team settled in Gannan Prefecture Information technology industry incubation park, enjoy 3 years of free rent.

“After joining the Gannan Prefecture Youth Chamber of Commerce, the Chamber of Commerce will provide members with long-term financial and taxation, legal affairs, and interpretation of relevant national policies, etc., and provide real help in the process of corporate growth.” Suonan Mucairang said in an interview.

At present, the team has successively provided the deployment of intelligent office solutions for many counties and cities in Gannan Prefecture, as well as prefectural government units and small and medium-sized enterprises. It was also selected as a “Science and Technology Innovation Enterprise in Gansu Province”, “Public Demonstration Platform for Small, Medium and Micro Enterprises in Gansu Province” and “Greenization, Informationization, and Intelligence” transformation service provider of traditional industries in Gannan Prefecture.

“I started my own business not to make a lot of money, but to promote the new development of my hometown based on the concept of new development.” Suonanmu Cairang said.

Gannan has little-known natural beauty, long history and culture, and colorful folk culture. “Strive to integrate Gannan’s characteristic culture into the production design of products, interpret the beauty of Tibetan culture from a modern perspective, and make Tibetan culture more in-depth and more vital.” This is the original intention of Ning Shaoxian, a Tibetan boy who founded the Fanjia Wenchuang brand.

In addition to R&D and sales of cultural and creative products, Ning Shaoxian is also the president of the Gannan Prefecture Youth Chamber of Commerce. “In recent years, the Chamber of Commerce has continued to build a solid and broad learning and exchange platform for members to help local young entrepreneurs attract investment, exchange learning, and promote externally. At the same time, in the form of mutual aid funds, it solves the funding bottleneck in the process of youth entrepreneurship in southern Gansu .”He said.

According to Ning Shaoxian, the Gannan Youth Chamber of Commerce was established in December 2018. It is managed by the Gannan Federation of Industry and Commerce. It provides a platform for resource integration and docking for young entrepreneurs, and provides free consulting services for the development of chambers of commerce.

At present, youth-serving enterprises are located in seven counties and one city in Gannan, and the industries involved are gradually diversified, including real estate development, intelligent software industry, cultural tourism industry, agricultural and livestock industry, and government project undertaking. The vast majority of members of the chamber of commerce are entrepreneurs who have graduated from universities in Gannan within five years.

According to the Market Supervision and Administration Bureau of Gannan Tibetan Autonomous Prefecture, there are currently more than 60,000 market entities in the local area, including enterprise households, individual industrial and commercial households, and farmers’ professional cooperatives. In 2022, 9,068 new market entities will be established in the state, with an additional registered capital of 17.338 billion yuan, a year-on-year increase of 22.6% and 18.2% respectively. (Finish)