‘The Music Has Stopped’: Crypto Firms Quake as Prices Fall 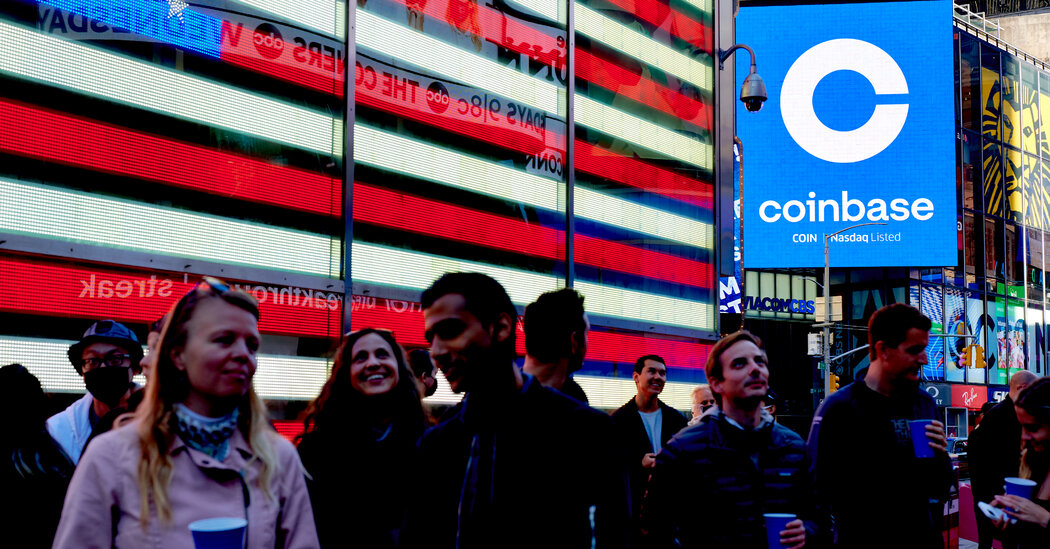 SAN FRANCISCO — No one wanted to miss out on the cryptocurrency mania.

Over the last two years, as the prices of Bitcoin and other virtual currencies surged, crypto start-ups proliferated. Companies that market digital coins to investors flooded the airwaves with TV commercials, newfangled lending operations offered sky-high interest rates on crypto deposits and exchanges like Coinbase that allow investors to trade digital assets went on hiring sprees.

A global industry worth hundreds of billions of dollars rose up practically overnight. Now it is crashing down.

After weeks of plummeting cryptocurrency prices, Coinbase said on Tuesday that it was cutting 18 percent of its employees, after layoffs at other crypto companies like Gemini, BlockFi and Crypto.com. High-profile start-ups like Terraform Labs have imploded, wiping away years of investments. On Sunday, an experimental crypto bank, Celsiusabruptly halted withdrawals.

The pullback in the crypto ecosystem illustrates the precariousness of the structure built around these risky and unregulated digital assets. The total value of the cryptocurrency market has dropped by about 65 percent since autumn, and analysts predict the sell-off will continue. Stock prices of crypto companies have cratered, retail traders are fleeing and industry executives are predicting a prolonged slump that could put more companies in jeopardy.

“The tide has gone out in crypto, and we’re seeing that many of these businesses and platforms rested on shaky and unsustainable foundations,” said Lee Reiners, a former Federal Reserve official who teaches at Duke University Law School. “The music has stopped.”

Cryptocurrencies are digital coins exchanged using networks of computers that verify transactions, rather than a centralized entity like a bank. For years, they have been marketed as a hedge against inflation caused by central banks flooding the economy with money. Bitcoin, the most valuable cryptocurrency, has a built-in limit to its supply.

But now with stocks crashinginterest rates soaring and inflation high, cryptocurrency prices are also collapsing, showing they have become tied to the overall market. And as people pull back from crypto investments, the outflow is exposing the unstable foundations of many of the industry’s most popular companies.

More than 62 crypto start-ups are now worth $1 billion or more, according to CB Insights, a firm that tracks private financing. Last year, the industry received more than $25 billion in venture funding across roughly 1,700 deals, according to research from The Block. OpenSeathe largest marketplace for the unique digital images known as nonfungible tokens, reached a staggering $13 billion valuation. And Wall Street banks such as JPMorgan Chase, which previously shunned crypto assets, and Fortune 500 companies like PayPal rolled out crypto offerings.

Many of these companies are equipped to survive a downturn in cryptocurrency prices. But cutbacks are likely to continue as they adjust their strategies after years of excessive growth. Among the most vulnerable may be start-ups that launched their own cryptocurrencies, as prices plummet across the board.

Some industry experts have long said the exuberant growth of the last two years wasn’t going to last forever, comparing it to the late-1990s dot-com boom. At the time, dozens of dot-com companies were going public amid hysteria over the early promise of the internet, even though few of them made money. When confidence evaporated in the early 2000smany of the dot-coms went bust, leaving just the biggest — such as eBay, Amazon and Yahoo — standing.

Read More on the World of Cryptocurrencies

This time, investors predict there will be more survivors. “You certainly have some overhyped companies that don’t have the fundamentals,” said Mike Jones, an investor at the venture firm Science Inc. “But you also have some really strong companies that are trading way below they should.”

There have been warning signs that some crypto companies were not sustainable. Skeptics have pointed out that many of the most popular firms offered products underpinned by risky financial engineering.

Terraform Labs, for example, offered TerraUSD, a so-called stablecoin with a fixed value linked to the U.S. dollar. The coin was hyped by its founder, Do Kwon, who raised more than $200 million from major investment firms such as Lightspeed Venture Partners and Galaxy Digital, even as critics warned that the project was unstable.

The coin’s price was algorithmically linked to a sister cryptocurrency, Luna. When the price of Luna plummeted in May, TerraUSD fell in tandem — a “death spiral” that destabilized the broader market and plunged some investors into financial ruin.

This week, Celsius’s announcement that it was freezing withdrawals had a similar impact. Celsius had aggressively marketed its banklike lending service to customers, promising yields as high as 18 percent if they deposited their crypto holdings with the company.

For months, critics wondered how Celsius could sustain such high yields without putting its depositors’ funds in jeopardy through risky investments. The company drew scrutiny from several state regulators. In the end, a drop in crypto prices appeared to put the company under more pressure than it could withstand.

With the price of Bitcoin tumbling, Celsius announced on Sunday that it was freezing withdrawals “due to extreme market conditions.” The company did not respond to a request for comment.

The market instability has also triggered a crisis at Coinbase, the largest U.S. crypto exchange. Between the end of 2021 and late March, Coinbase lost 2.2 million active customers, or 19 percent of its total, as crypto prices dropped. The company’s net revenue in the first three months of the year shrank 27 percent from a year earlier, to $1.2 billion. Its stock price has plunged 84 percent since it went public last year.

This month, Coinbase said it would rescind job offers and extend a hiring freeze to battle the economic downturn. On Tuesday, it said it would cut about 1,100 workers.

Bitcoin. A Bitcoin is a digital token that can be sent electronically from one user to another, anywhere in the world. Bitcoin is also the name of the payment network on which this form of digital currency is stored and moved.

Blockchain. A blockchain is a database maintained communally and that reliably stores digital information. The original blockchain was the database on which all Bitcoin transactions were stored, but non-currency-based companies and governments are also trying to use blockchain technology to store their data.

Coinbase. The first major cryptocurrency company to list its shares on a U.S. stock exchange, Coinbase is a platform that allows people and companies to buy and sell various digital currenciesincluding Bitcoin, for a transaction fee.

Web3. The name “web3” is what some technologists call the idea of a new kind of internet service that is built using blockchain-based tokensreplacing centralized, corporate platforms with open protocols and decentralized, community-run networks.

DAOs. A decentralized autonomous organizationor DAO, is an organizational structure built with blockchain technology that is often described as a crypto co-op. DAOs form for a common purpose, like investing in start-ups, managing a stablecoin or buying NFTs.

“It is now clear to me that we over-hired,” he wrote. A Coinbase spokesman declined to comment.

“It had been growth at all costs over the last several years,” said Ryan Coyne, who covers crypto companies and financial technology at the Mizuho Group. “It’s now turned to profitable growth.”

Gemini, the crypto exchange led by the billionaires Tyler and Cameron Winklevoss, also announced this month that it was laying off 10 percent of its work force. In a memo to staff, the Winklevoss twins said the industry had entered a “crypto winter.”

But they also expressed optimism about the future of the industry. “The crypto revolution is well underway and its impact will continue to be profound,” they wrote in a memo. “But its trajectory has been anything but gradual or predictable.”

Last year, the Singapore-based exchange Crypto.com aired a now-notorious TV commercial starring the actor Matt Damon, who declared that “fortune favors the brave” as he encouraged investors to put their money in the crypto market. Last week, Crypto.com’s chief executive announced that he was laying off 5 percent of the staff, or 260 people. On Monday, BlockFi, a crypto lending operation, said it was reducing its staff by roughly 20 percent.

Gemini and BlockFi declined to comment. A Crypto.com spokesman said the company remains focused on “investing resources into product and engineering capabilities to develop world-class products.”

Cryptocurrencies have long been volatile and prone to boom-and-bust cycles. In 2013, a Chinese ban on Bitcoin sent its price tumbling. In 2017, a proliferation of companies creating and selling their own tokens led to a run-up in crypto prices, which crashed after regulators cracked down on so-called initial coin offerings.

These bubbles are built into the ecosystem, crypto enthusiasts said. They attract talented people to the industry, who go on to build valuable projects. Many of the most vocal cheerleaders encourage investors to “buy the dip,” or invest more when prices are low.

“We have been in these downward spirals before and recovered,” Mr. Jones, the Science Inc. investor, said. “We all believe in the fundamentals.”

Some of the companies have also remained defiant. During Game 5 of the N.B.A. finals on Monday night, Coinbase aired a commercial that alluded to past boom-and-bust cycles.