The national cold wave group chat map is released. Are you a cry group or an atmosphere group? – Chinanews.com 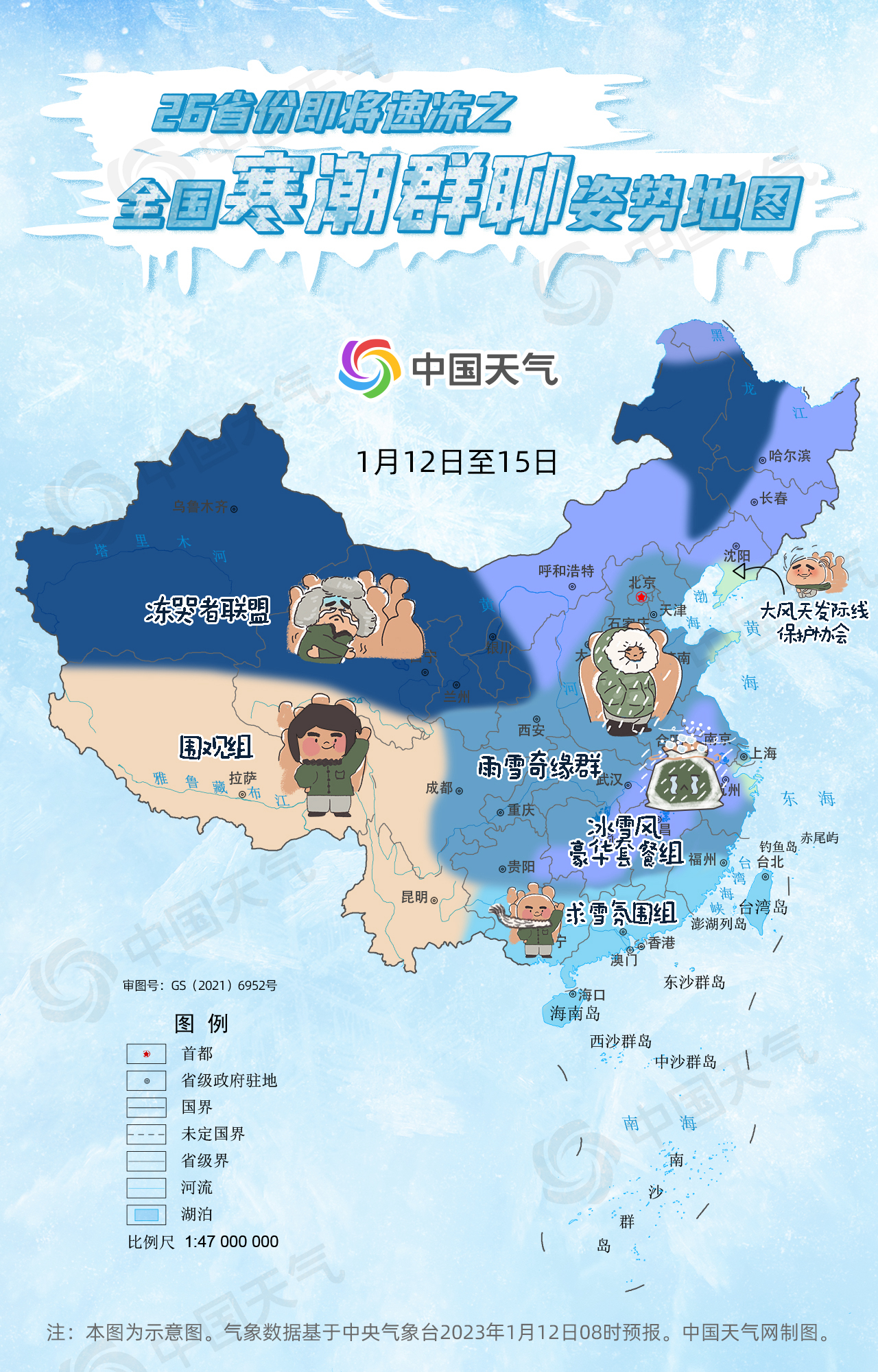 
26 provinces will be frozen! The national cold wave group chat map is released. Are you a cry group or an atmosphere group?

On January 12, the first cold wave of 2023 has arrived in Inner Mongolia. In the next few days, it will sweep southward and sweep across most of my country. The Central Meteorological Observatory has upgraded and issued a yellow cold wave warning. About 26 provinces, regions and cities will soon join the cold wave group chat. Where will you join the “Alliance of Frozen Cryers”? Where will I get the “Ice and Snow Wind Super Deluxe Package”? Where did Miss Xue silently act as the “Que Xue Atmosphere Group”? ChinaWeather.com launched a national cold wave group chat posture map, please take a seat and scan the code to join the group!

The cold wave that is currently affecting our country has brought a severe drop in temperature of over 20°C to Altay and other places in Xinjiang yesterday. According to Zhang Juan, a meteorological analyst at China Weather Network, this cold wave will continue to press southward step by step. It will mainly affect most of the north today and tomorrow. It will cross the Yangtze River on the 14th. At that time, the south will enter the core impact period.

“This cold wave is an all-around player. Not only will the temperature drop sharply, but it will also bring large-scale strong winds, rain and snow. The central and eastern regions will experience the largest range of rain and snow since winter. Most of the country except Tibet and Yunnan will join the cold wave. Group chat.” Zhang Juan said.

From the national cold wave group chat posture map launched by China Weather Network, it can be seen that Xinjiang, the eastern part of Northwest China, and the eastern part of Inner Mongolia are the first to undertake the cold wave and air-conditioning crit. , These places were forced to join the “Frozen Cryer Alliance”. Friends in this area, it is recommended to take out the strongest winter warming equipment and go out when the sun is sufficient in the afternoon.

North China, Huanghuai, Jianghuai, Jianghan, the eastern part of Southwest China, and northern Jiangnan will join the “Snow and Rain Group”. The cumulative snowfall in western Hebei, southern Shaanxi, western Henan, and western Hubei can reach blizzards, and the snow is big enough to make snowmen. This group chat may be swiped with pictures of sun-dried snow. However, the local weather is cold and the snow is difficult to melt, which is easy to cause slippery roads, and the risk factor is relatively high for those who have travel plans.

As the cold wave infiltrates step by step, Liaodong Peninsula, Hangzhou Bay and other places will be affected by the terrain and the large temperature difference between land and sea from tomorrow. There will be strong winds of magnitude 6-7 and gusts of magnitude 8 or above. We have to join the “gale sky hairline protection” association”. The hair fluttered under the strong wind. When going out, local friends should not only guard against temporary structures and falling objects, but also protect their hairlines at all times.

For most of the Northeast and Jiangnan and other places, the weather is the most complicated. Freezing, rainy, snowy, and strong winds will come in groups, so we can only forcefully form a “luxury ice and snow wind package group”. In Heilongjiang, Jilin, Liaoning, Zhejiang, Jiangsu, Jiangxi, Hunan, Shanghai and other places, the temperature drop generally starts at around 15°C, and there are still light to moderate rain and snow. Among them, Zhejiang, Jiangsu, Jiangxi, Hunan and other places were abnormally warm in early January. After the arrival of the cold wave, it collided with the strong warm and humid air flow to produce violent convection. Thunderstorms occurred in many places or in the third and ninth days of the cold winter in the twelfth lunar month, which was rare in the same period. The weather is complicated, and the friends in this group chat complain the most about: “The coldness is 360 degrees without dead ends, and the ice, rain and snow shoot randomly on the face.” It is recommended that the friends avoid going out during bad weather.

When everyone was hit by the cold wave one after another, the Qinghai-Tibet Plateau and Yunnan perfectly “shielded” the cold wave and joined the “onlooker group”; as for Guangdong, Guangxi, Hainan and other places, although the cold wave arrived late, the temperature drop was relatively obvious. However, after the cold wave has traveled thousands of miles, a lot of “vigor” has been consumed. After the temperature drops, the maximum temperature in the above-mentioned areas is still generally above 10°C. These places will be pulled into the “Snow Atmosphere Group” group chat. The most discussed topics must be This time, I missed the snow again.

The cold wave in 2023 will be fierce for the first time, and the cooling, rain and snow will be very strong. No matter which group chat group you are about to join, you need to take precautions and increase your clothing reasonably. It is currently during the Spring Festival travel season. It is recommended to avoid the period affected by bad weather, adjust the travel plan in time, and pay attention to the slippery road when driving at high speed. China Weather Network wishes all the “group friends” a smooth trip and a safe return to the “people who love each other and love each other”.


Share
Facebook
Twitter
WhatsApp
Copy URL
Previous article
Pregnant women are about to give birth, the train speeds up the new life by 10 minutes-Chinanews.com
Next article
After losing everything, what do we have?