The ordinary persistence of the first-line village doctors: sending the doctor to the home and being on call-Chinanews.com 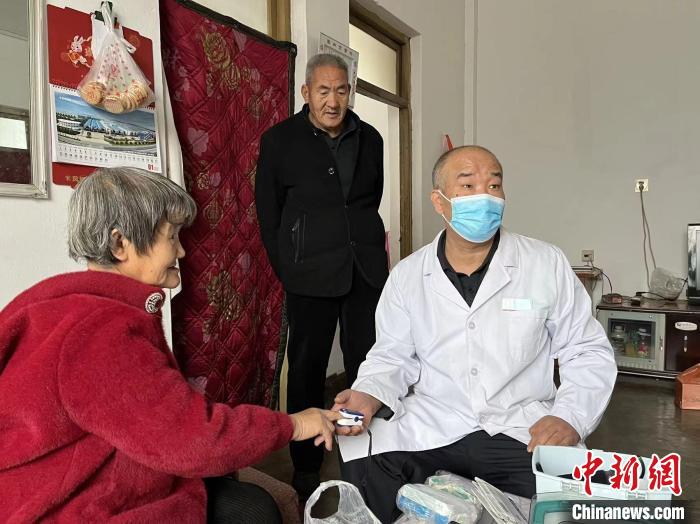 (New Year’s walk to the grassroots) The ordinary persistence of front-line village doctors: sending doctors to households on call

At around 9 o’clock in the evening, I learned that the 92-year-old Zhang Yuer had a fever. After the village doctor Ji Huibin instructed him to take the medicine, he was worried. At 12 o’clock in the evening, his family members called and said that the old man’s low fever had not gone away. Ji Huibin quickly got up from the bed and decided to come to the house. a trip.

Measuring blood pressure, body temperature, blood oxygen saturation… all the indications were normal, Ji Huibin was a little relieved, and left after injecting Antongding and Ribavirin for the old man. At 6:30 the next morning, Ji Huibin went there again, and the old man’s fever had subsided. After that, he came to check twice a day until the old man got better after five days.

“On December 25, I was talking about silent hypoxia. I managed more than 900 villagers in the village, and there were many elderly people. I dare not delay.” Ji Huibin is a village doctor in Anding Village, Di Village, Hongdong County, Linfen City, Shanxi Province. , who has worked here for more than 20 years, knows who has diabetes and high blood pressure in the village.

When the new crown epidemic superimposes respiratory diseases in rural areas, in Hongdong County, Linfen City, a populous county, more than 700 village doctors like Ji Huibin stick to the front line 24 hours a day, using both Chinese and Western medicine, and are on call to minimize the impact of the virus on villagers, especially is a threat to the elderly population.

“When you are doing the screening, you must clearly register whether the elderly suffer from basic diseases such as high blood pressure, diabetes, stroke, uremia, etc., and mark the corresponding colors…” Recently, the new crown virus held in Hongdong County Medical Group At the key work promotion meeting of infection medical treatment, Yan Qing, the public health center of the group, was explaining the main points of health monitoring and inspection services for the elderly over 65 years old.

As the focus of epidemic prevention and control shifts from “prevention” to “cure”, the pressure on grassroots medical institutions has increased sharply. How to “protect health and prevent severe illness” and smoothly transition to the peak? On the one hand, Hongdong County uses “red, yellow and green” three-color marks for the corresponding groups according to the basic diseases and the degree of risk after infection, and manages them in different levels; How to treat patients with different symptoms, how to refer severe patients, etc.

The county also uses the county medical group as a carrier to give full play to the advantages of the medical community and divide medical institutions at all levels into four echelons. As the fourth echelon with the closest contact with the villagers, the village clinic ushered in the peak of villagers’ consultation in mid-December.

“Around December 11, the number of fevers in the village gradually increased, and reached its peak on December 15. Thirty or forty people came to see the doctor every day. At first, everyone was quite scared.” During that time, Ji Shuxiong was busy from morning to In the evening, there are often calls from villagers in the middle of the night.

65-year-old villager Wang Weixing is a key person under Ji Shuxiong’s management. On the morning of January 6, 2023, the fever caused by the new coronavirus infection caused difficulty in urinating, the lower abdomen swelled, and the pain was unbearable. Ji Shuxiong rushed to the patient’s home immediately after receiving the call.

“The initial diagnosis required emergency indwelling catheterization. After seeking the consent of my family, I hurriedly drove the patient to Shanjiao Hospital.” Ji Shuxiong recalled that the emergency department of the hospital needed to catheterize the patient, but Ji Shuxiong did it for him because of insufficient money. Part of the treatment fee is paid in advance, and the patient is driven back after the treatment.

Ji Shuxiong did not dare to delay when encountering patients with serious comorbidities or tending to be severe or critically ill. He helped to dial 120 and sent them to Hongdong County People’s Hospital.

50-year-old Wang Yanhu is a village doctor in Qinbi Village, Dahuaishu Town, Hongdong County. He was born in a family of traditional Chinese medicine. At the peak of the new crown virus infection, he used traditional Chinese medicine as the mainstay and Western medicine as a supplement to prescribe the right medicine. For symptoms such as fever, cough, gastrointestinal discomfort, and general fatigue, he guided the villagers to take antipyretics and Xiaochaihu decoction, etc., and the effect was very good. There are still some elderly people who have not been infected with the new crown virus and are at high risk during the Spring Festival, and we will also focus on these people.”

According to Gao Hongan, director of the Health and Sports Bureau of Hongdong County, under the three-level medical service system of the county and village, even at the peak of the new crown virus infection, the county’s bed utilization rate was 72%, effectively avoiding a run on medical resources.

During the interview, the reporter learned that the Hongdong County Party Committee and the county government have decided to distribute a subsidy of 100 yuan per day to the village doctors who are fighting in the front line for one month in a row. (Finish)