The work report of the Chongqing municipal government frequently mentions “opening up” and continuously expands the breadth and depth of inland opening-Chinanews.com 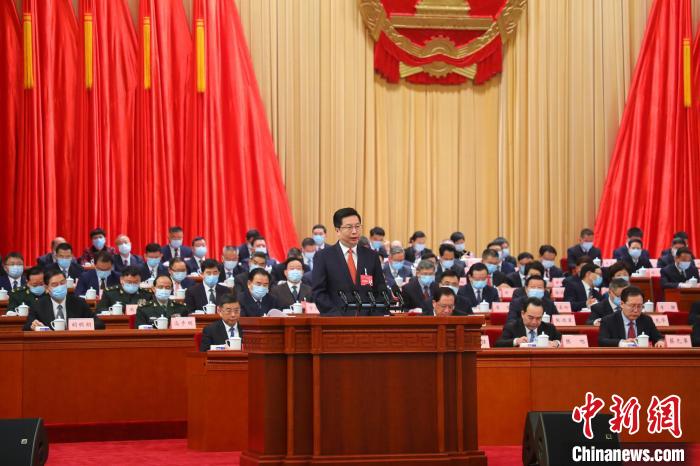 On January 13, Hu Henghua, mayor of Chongqing Municipal Government, delivered a government work report at the First Session of the Sixth National People’s Congress of Chongqing.Photo by Liang Qinqing

Chinanews.com, Chongqing, January 13th (Liang Qinqing) At the First Session of the Sixth Chongqing Municipal People’s Congress that opened on the 13th, Hu Henghua, Mayor of Chongqing Municipal Government, frequently mentioned the word “opening up” in the government work report. The breadth and depth of inland opening up Keep expanding.

Hu Henghua said that in the past five years, the China-Europe Railway Express (Chengdu-Chongqing) has taken the lead in the country in terms of its operation level, and the number of international routes has increased to 109. Successfully established a port-type, land-port-type, airport-type, production and service-type national logistics hub. Two ports were newly approved to open, and a “single window” for international trade was established. The China-Singapore Connectivity Project has signed a total of US$25.26 billion in government and commercial projects, and US$29.13 billion in financial service projects. The influence of the Smart Expo, the West-West Trade Fair, and the China-Singapore Financial Summit has continued to increase. The actual use of foreign capital has been steadily improved, foreign trade import and export has increased to 820 billion yuan, the cumulative service trade volume has reached 300 billion yuan, 53 new international friendship cities and friendly exchange cities, and 3 new consulates general in Chongqing.

In the past year, Chongqing formulated the high-quality implementation of the “Regional Comprehensive Economic Partnership Agreement” (RCEP) action plan, launched the implementation of the three-year action plan for the high-quality development of foreign trade and the three-year action plan for the construction of high-quality foreign investment gathering places, and introduced the accelerated development of foreign trade. Implementation plans for new formats and models. The value of goods transported by the Western New Land-Sea Corridor increased by 36%, and the number of China-Europe Express (Chengdu-Chongqing) trains exceeded 5,000. It is estimated that the actual use of foreign capital for the whole year will be 1.8 billion US dollars, foreign trade imports and exports will increase by 2.5%, and cross-border e-commerce transactions will increase by 30%.

Hu Henghua said that in 2023, Chongqing will strive to achieve a high level of opening up to the outside world and better integrate into the domestic and international dual cycles.

Accelerate the construction of the new land-sea corridor in the west. Give full play to the role of the logistics and operation organization center of the Chongqing channel, launch the implementation of the three-year action plan for the construction of the new western land-sea channel, increase the number of rail-sea combined transport trains, expand the coverage of international combined transport trains, and improve the efficiency of cross-border highway shuttle bus transportation. Strengthen the connection between the Western New Land-Sea Corridor and the China-Europe Railway Express, the Yangtze River Golden Waterway, and the international aviation network, speed up the construction of projects such as the leading port inbound railway, add and increase international routes, and promote the national multimodal transport demonstration project. Construct the demonstration project of the China-Europe Railway Express (Chengdu) assembly center, arrange an international economic and trade cooperation demonstration area, an international commodity trading exhibition center, a distribution center and an overseas warehouse along the corridor, deepen the pilot project of railway waybill financial services, and enlarge the “channel + economy and trade + industry” “Linkage effect. 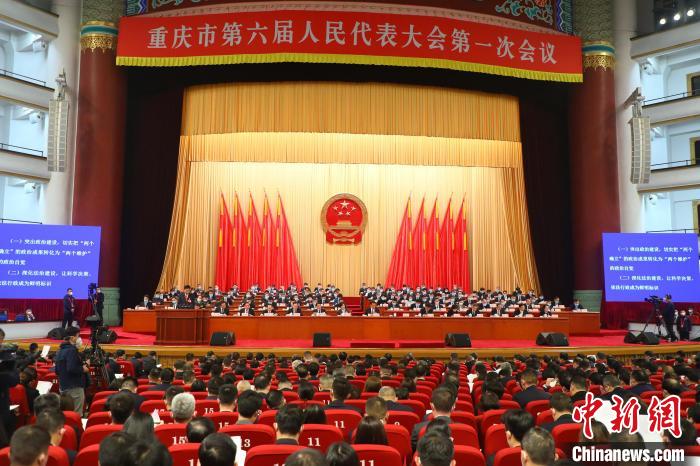 On January 13, the First Session of the Sixth National People’s Congress of Chongqing opened in the Great Hall of the People in Chongqing.Photo by Liang Qinqing

Optimize foreign trade structure. Promote the optimization and upgrading of trade in goods, build a national processing trade industrial park, a national foreign trade transformation and upgrading demonstration base, and a national import trade promotion and innovation demonstration zone, consolidate the export advantages of computers, mobile phones and other products, and expand the export of new energy vehicles, smart home, smart medical care and other products , increase the import scale of advanced technology, important equipment, energy resources, etc., and promote the pilot program of domestic and foreign trade integration. Promote the innovative development of service trade, carry out in-depth comprehensive pilot projects for expanding the opening up of the service industry and pilot projects for innovative development of service trade, and cultivate and strengthen emerging service trade such as research and development design, inspection and testing, professional services, and bonded maintenance. To develop digital trade, relying on the China (Chongqing) Cross-border E-Commerce Comprehensive Pilot Zone, successfully host the 2023 China (Chongqing) Cross-Border E-Commerce Fair, and continue to expand the scale of digital trade in industrial Internet, smart cities and other fields.

According to the report, in the next five years, Chongqing will strive to achieve a total import and export volume of 1.1 trillion yuan, keep the actual use of foreign capital at the forefront of the west, and step up the construction of inland open highlands to a higher level. (Finish)