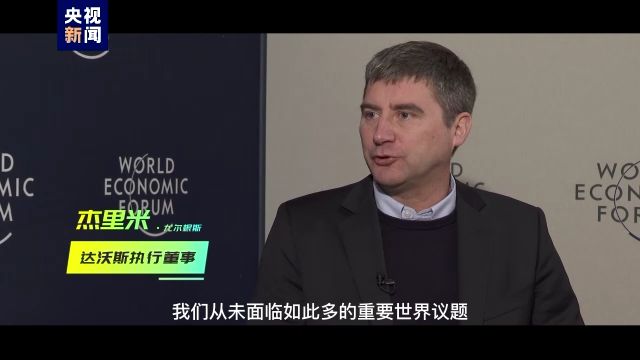 On the 17th local time, the 2023 World Economic Forum Annual Meeting started its first day in Davos, Switzerland. More than 60 sub-forums and themed activities were launched one after another.

The World Economic Forum recently released the “Global Risks Report 2023”, pointing out that conflicts and geoeconomic conflicts have triggered a series of deeply related global risks. In the next two years, energy and food shortages will continue to plague the world, and the cost of living and debt servicing will rise sharply.

In this regard, a reporter from China Central Radio and Television interviewed a number of heavyweight guests.

World Economic Forum executive director Jeremy Jurgens (Jeremy Jurgens) said in an interview with the headquarter reporter that this is the most important Davos forum he has participated in in the past 24 years, and he has never seen There are so many critical global problems that can only be solved through cooperation. He said that at this moment when cooperation is urgently needed, they have high differences in a series of fields such as politics and economy. So it’s really important to bring people together and find those areas where there are opportunities to collaborate, to engage, to interact. This does not mean that everyone agrees on everything, what really matters is that people can come together and find a common policy response to some problems.

Sadia Zahidi, executive director of the World Economic Forum, also said that two-thirds of the chief economists they surveyed feared a global recession, but a third believed there was still a chance of getting out of it. situation. Without cooperation on trade, technology, human capital and more, the recession will continue, she said. They need to transfer information and knowledge and innovation across borders to improve the living standards of all, which is one of the core topics that must be discussed at this annual meeting.

Chinese elements have always been a focus of the Davos Forum. Many experts believe that in the face of a divided world, China has always played the role of a “stabilizer” and is an important driving force for global economic recovery. 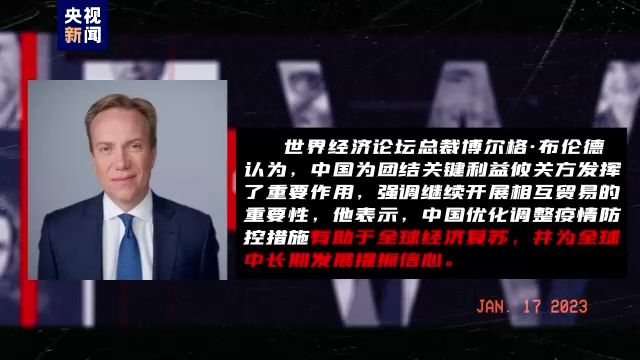 Borger Brende, president of the World Economic Forum, believes that China has played an important role in uniting key stakeholders, stressing the importance of continuing mutual trade. He said that China’s optimization and adjustment of epidemic prevention and control measures will help the global economic recovery and boost confidence in the medium and long-term development of the world.

In addition, China’s measures to deal with climate change and protect the environment, as well as China’s technology and innovation will have a global impact, and China is also crucial to promoting global cooperation.

Jeremy Jurgens, executive director of the World Economic Forum, believes that many people are looking forward to the recovery of China’s domestic economy.

People are expecting some loosening in China’s real estate sector, and people are hoping that China will revive consumer demand at the national level, which will help boost global growth, he said. Georgieva, managing director of the International Monetary Fund, said recently that a third of the world’s economies are likely to fall into recession this year, and a recovery in China would help reduce that pressure.