Three generations of Guangxi iron police guard the new land-sea channel in the west and experience the great changes in China’s railways-Chinanews.com 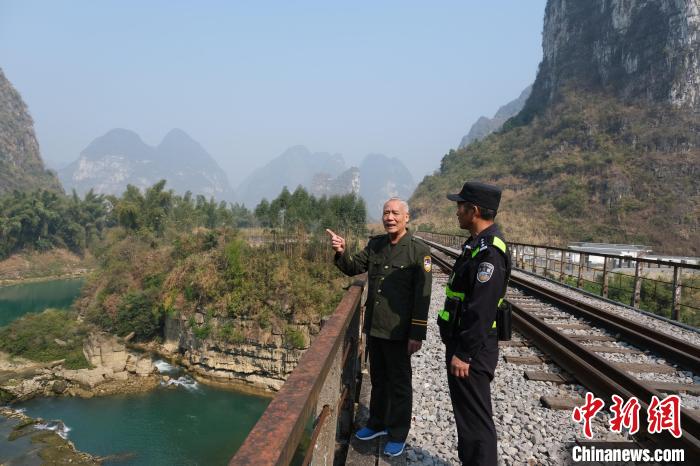 “I have been guarding the Guizhou-Guizhou Railway since 1971. In the 1970s and 1980s, when railway pirates were rampant, we often rolled and fought with these gangs on sharp ballasts, and we were injured all over our bodies.” Lu Yuanren recalled .

At Lu Yuanren’s home, he displayed his police badges, police uniforms and old photos that he had collected for many years, and introduced every story behind them to reporters like a few treasures. Although he is over seventy years old, he still has a quick mind when talking about the Guizhou-Guizhou Railway.

Lu Yuanren, 72 years old this year, is an old policeman of the Jinchengjiang Station Police Station of the Liuzhou Public Security Department of the Nanning Railway Public Security Bureau. In the 1970s and 1980s, he was stationed in this railway police station in the mountainous area of ​​western China to guard the Guizhou-Guizhou Railway safety.

The picture shows Lu Yuanren (left) recalling the story of the Guizhou-Guizhou Railway to Zhang Dahai (right).Photo by Xia Yangchun

As the main channel of the middle line of the Western New Land-Sea Corridor, the Guizhou-Guizhou Railway connects Guizhou and Guangxi provinces and is the first inter-provincial railway in Southwest China.

“At that time, the railway traffic was backward, and the Jinchengjiang section to Nandan section was a Panshan railway, and the speed of the diesel locomotive was as low as 10 kilometers per hour.” Lu Yuanren said that the gangs of pirates in nearby villages would take advantage of the dark to climb quickly. Get on the truck compartment, throw the stolen rice, refrigerators and other goods off the rails, and jump off the truck to escape.

“At that time, there were as many as dozens of railway theft cases every year, and we squatted down every day to arrest the gangs.” Lu Yuanren said. Since then, in order to ensure the safety of cargo transportation on the Guizhou-Guizhou Railway, the police station at Jinchengjiang Station often undertakes the task of escorting the goods by the police. 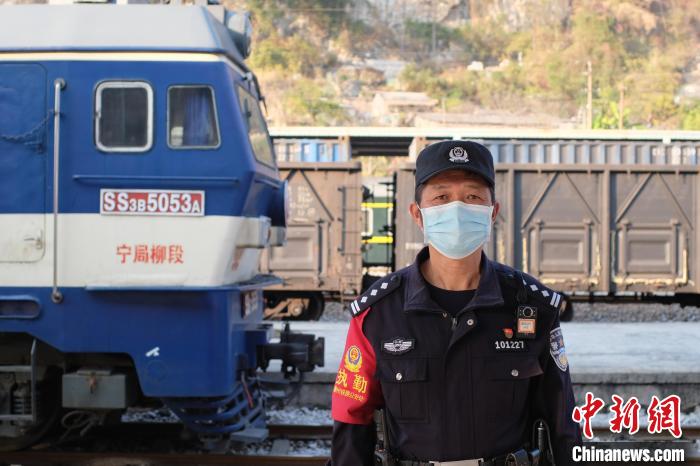 The picture shows Zhang Dahai on duty.Photo by Liu Juncong

Zhang Dahai, 57 years old this year, is Lu Yuanren’s “apprentice”. After retiring from the army in 1990, he became a policeman at the Jinchengjiang Station Police Station. Introverted and reticent, he had a long-term experience as a car escort.

“In the 1990s, the police escorted by trucks needed to carry dry food with them, and squeezed in the open-air trucks all the way forward. When it was too hot, they picked some tree branches for shade, and they couldn’t hide from the heavy rain.” Zhang Dahai said.

After 2009, with the rapid development of China’s economy and the electrification of the Guizhou-Guizhou Railway, the awareness of the rule of law among the people along the line has been continuously enhanced, and the era of rampant railway theft has ceased to exist.

“Around 2009, the police escort was cancelled, the speed of the trains on the Guizhou-Guizhou Railway was getting faster and faster, and the efficiency of cargo transportation was also significantly improved.” These changes made Zhang Dahai, who had been working at the station for nearly 20 years, very happy. 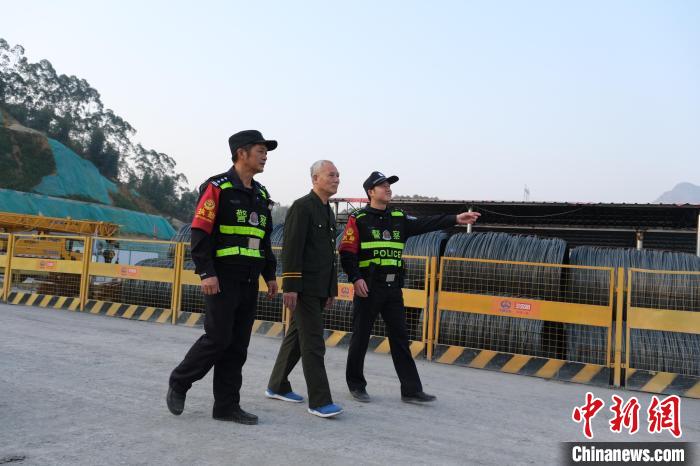 Today, the Guinan high-speed railway linking Guiyang, Guizhou and Nanning, Guangxi is expected to open at the end of this year. The backbone team member of the preparatory group of the station police station.

“My hometown is located next to the Guizhou-Guizhou Railway. Since I was a child, my grandmother often took me to the railway to watch the trains. This made me full of curiosity about this railway and trains.” “Post-95” Jinchengjiang Station Police Station Police Meng Mengliang Said.

In 2015, Meng Yuliang experienced the speed of high-speed rail EMUs for the first time. This feeling, which is completely different from electric locomotives, made him very unforgettable.

And when he learned that the high-speed rail was about to open in his hometown, Meng Yuliang couldn’t hide his excitement. He and his colleagues often go to villages, primary and secondary schools along the railway line to popularize high-speed rail safety knowledge to the public by playing animation videos.

“For decades, the great changes in the railway traffic between Guizhou and Guangxi are also the epitome of China’s railway development. Like my predecessors, I will stick to it.” Meng Yuliang said. (Finish)