Tony Nominees for Choreography Put the Past in Motion 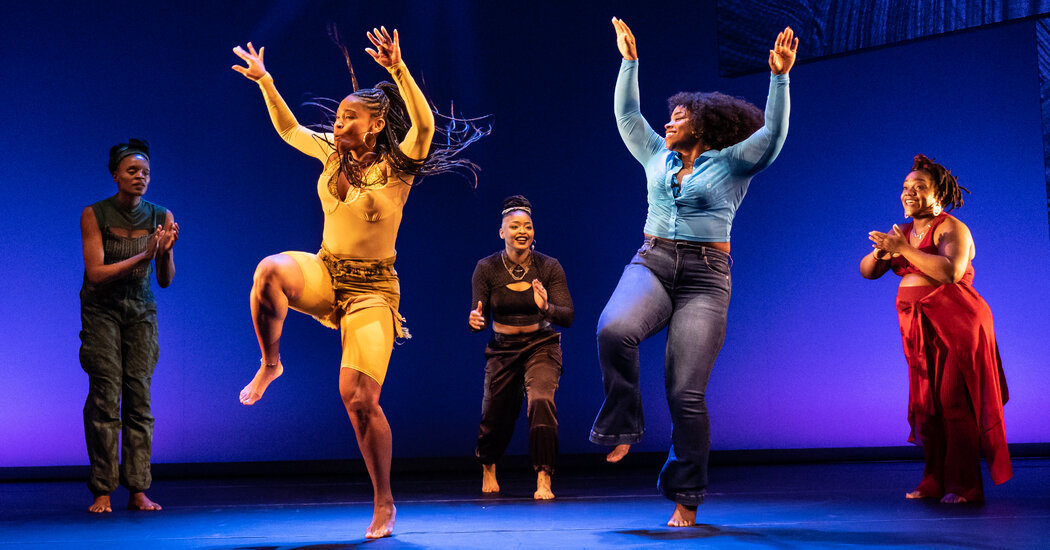 A Black dancer and an Irish one face off in a dance contest in 19th-century New York. They take turns, each trying to top the other with steps and rhythms that are unique and unbeatable. It’s adversarial but also collegial, since the premise both assumes and encourages commonality, the kind of back-and-forth that breeds hybrids. This is a primal scene of American dance, and a version of it is on Broadway now.

Whether in revivals, jukebox musicals or reimaginings of more distant history, a lot of the dance on Broadway these days is dance of the past. It’s theater, so the aim is less historical fidelity than persuasiveness. The choreography has to represent how people used to move in a way that makes sense to people today. But that constraint contains a possibility: In watching performers of the present embody the dance of the former times, we might feel, in our own bodies, how the present and the past are connected.

That possibility was live for all five shows nominated for Tony Awards in choreography this year. The subject of each is, in some sense, historical. But the one that addresses dance history most directly is “Paradise Square.” It’s a musical about the Black and Irish denizens of the Five Points district in the 1860s. In the decades before, this neighborhood was a crucial site of interracial exchange and invention, a nursery not just for tap dance but for American theatrical dance in general — the kind that would long characterize Broadway musicals.

Mainly set in the kind of tavern where much cultural exchange occurred, the story seems to make dance central and consequential. No one knows exactly what the dancing in the Five Points looked or sounded like, so Bill T. Jones, leading a team of choreographers, is free to juxtapose some ideas of the Black and African side (Juba dance, shout) with some ideas of the Irish (the fast stepping familiar from “Riverdance”). But this choreography is subtle and inventive only compared to the absence of those qualities in the score and book. It doesn’t persuade.

The Irish dance, credited to Jason Oremus and Garrett Coleman, is served somewhat better, partly because the Irish clichés in the music support it. Two of what the program calls “Irish Dancers” (Coleman and Colin Barkell), with little role in the plot, get to be briefly impressive in bursts of footwork. But even as the story builds to that Black vs. Irish dance-off, the dancing doesn’t make us feel how and why Black and Irish dance mixed, the similarities and differences that attracted the cultures to each other.

It’s a missed opportunity. “Paradise Square” might have staged a shocking, thrilling return to sources, especially the Black ones. Instead, in a deeply flawed show, it offers the sort of choreography that inspires comments like “But wasn’t the dancing good?” Not good enough.

A revival of “The Music Man,” a tried-and-true classic, is a much simpler choreographic assignment. Warren Carlyle does the job just fine. He has an adequate, nostalgic grasp of the period flavor, the “new steps” of the 1910s. The origins of these moves — in places like the Five Points before spreading to places like Iowa, the musical’s setting, and to the white stages of Broadway — isn’t part of the story. So Carlyle can focus on arranging a large cast of skilled dancers. If it’s all a little cautious and underwhelming, so is the rest of the production.

Carlyle offers a professional, if uninspired, take on Broadway choreography as it used to be. “Six” is much more current, despite being about the wives of Henry VIII. The conceit of the show is to give them voice by casting them as contemporary pop divas, inspired by Beyoncé, Rihanna and the like. It’s a singing contest, and we expect to see certain kinds of dancing. These are dancing singers, and as each queen takes her turn, the others serve as the backup that every pop diva commands in concert.

This is dance of the present, and Carrie-Anne Ingrouille, the choreographer, is up to speed in the genre and its variations — the ratios of sass and sex and empowerment moves, even the requisite absence of dance in Adele-style heartache. She keeps the action both tight and fluid, letting the performers save enough breath for all their belting. Like the clever, catchy pastiche songs, the choreography identifies its sources without quoting directly. It gives the pleasure of finding what we already know in a context where we might not expect it.

A show about Michael Jackson, the King of Pop, and one of the great dancing singers, might seem to call for a similar approach. But “MJ,” as in so many other ways, is a different beast. It’s a jukebox musical, so the whole point is to hear the songs you know and love. But many of these songs already have choreography inextricably attached: that of Jackson’s hugely influential music videos of the 1980s. This isn’t just a period style that can be reproduced in general. Plenty of people who know the words and melodies also know all the steps.

What is Christopher Wheeldon, the choreographer of “MJ,” to do? For the parts of the show covering Jackson’s early life, the Motown and Soul Train years, Wheeldon can work idiomatically, borrowing the styles to tell the story. When the timeline reaches the advent of MTV, though, he balks, having dancers tease some of the zombie boogie from “Thriller” at the back of the stage, facing away.

It’s true that the second act begins with a close-to-verbatim reproduction of Jackson’s epochal “Motown 25” performance of “Billie Jean.” And Myles Frost, who plays the adult Jacksonis an astonishing mimic. (He dances that “Billie Jean” a little better than Jackson did.) But elsewhere, Wheeldon keeps replacing the original choreography with his own, and I kept feeling my heart sink, both as a lifelong Jackson fan and a dance critic.

An effective replacement would have to be an improvement. And while Wheeldon is expert at crowd control and transitions (and an extremely accomplished choreographer of ballet), he has little feel for what Jackson in the show calls “smelly jelly” — funk, swing or whatever the dancers of the real Five Points called it. Despite help from Rich and Tone Talauega, who worked with Jackson, Wheeldon keeps swerving from that core, straightening away the rhythmic complexity of Jackson’s dancing along with its strangeness.

The most telling moment is the scene of the dancers who inspired Jackson. The representations of the Nicholas Brothers and Fred Astaire show no understanding of what Jackson saw in them (rhythm and attack that extend back to the Five Points), and thus the production can’t fully communicate how this great imitator forged a style that has been endlessly imitated. The only predecessor that “MJ” comprehends is Bob Fosse, whose own easy-to-imitate style defines the boundaries of Broadway dance inside which “MJ” keeps retreating.

A good director might have pointed this out. But the director of “MJ” is Wheeldon (who, granted, had many other Jackson-related problems to deal with). There’s a strong Broadway precedent for combining those roles, one established by Jerome Robbins. But among this year’s Tony nominees, the best example of how that can benefit a show isn’t Wheeldon.

It’s Camille A. Brown. “For Colored Girls Who Have Considered Suicide/When the Rainbow Is Enuf.” is what its dancing-poet author, Ntozake Shange, called a “choreopoem.” Although the show was a Broadway hit in 1976, the form didn’t become common, even as the text became canonical. Directing and choreographing this revivalBrown becomes one of exceedingly few Black women ever to take both roles for a Broadway show. (The last that comes to my mind is Katherine Dunhamin 1955.) That fact matters, but so does how she uses the combined power: She restores the work as an expression of a culture in which dance is central.

The seven women of the cast recite poems, and they’re always dancing, in sadness and joy. They dance in girls’ games that become adult play, part of Shange’s original conception. But Brown adds American Sign Language, making the weaving of language and motion even more visible. Like the cast of “Six,” these women back each other up in dance. But in Brown’s vision, you can also sense their connections in the way that an exposing monologue by one, about abortion or abuse or self-discovery, reverberates in the silent bodies of the others.

This isn’t what we know and expect of Broadway choreography. But unlike “Paradise Square,” it is a powerful return to a source. Dance, Shange once wrote, “is how we remember what cannot be said.” Brown reminds us.