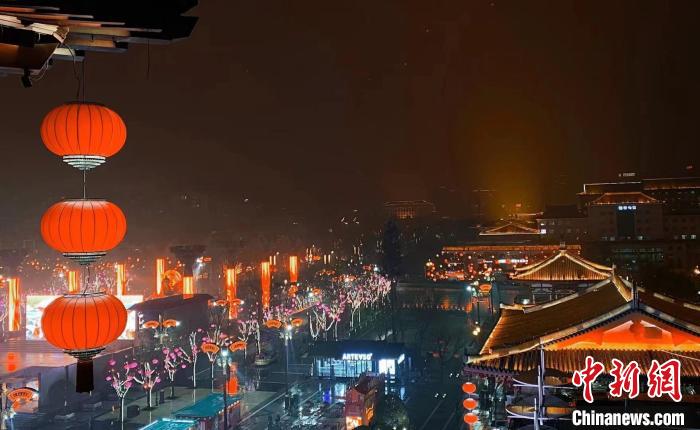 China News Service, Xi’an, January 23 (Reporter Zhang Yichen) The reporter learned from the Qujiang Brigade of the Traffic Police Detachment of the Xi’an Public Security Bureau on the 23rd that in order to do a good job in the management of road traffic order in Qujiang New District during the Spring Festival in 2023, improve the traffic order of Qujiang New District. The traffic efficiency of the road network around the core scenic spots such as Tang Everlasting City, the traffic police department will implement emergency traffic control measures for the roads in the area under its jurisdiction in accordance with laws and regulations.

According to the monitoring data of the Xi’an traffic police department, on the evening of January 22, the number of passengers entering the Qujiang New District in Xi’an exceeded 400,000. The traffic police department took corresponding control measures according to the actual traffic in the jurisdiction, and the signal lights activated the first-level response mode. At the same time, it is recommended that tourists travel at staggered peaks and travel rationally.

As one of the hot spots in Xi’an, Datang Everbright City, whenever night falls, performance art such as “Tumbler”, “Levitating Li Bai”, and “Tang Tang Secret Box” began to be staged, attracting a large number of tourists. In July 2020, Xi’an Datang Everbright City was selected into the “National Demonstration Pedestrian Street” together with Nanjing Confucius Temple, Hangzhou Hubin Road, Chongqing Jiefangbei, and Chengdu Kuanzhai Alley.

According to the Qujiang Brigade of Xi’an Traffic Police, from January 23 to January 27, 2023, from 17:00 to 23:00 every day, Ci’en Road, Ci’en West Road, Ci’en East Road, and Yannan Road will be implemented according to the situation of motor vehicle congestion. Access traffic control. Ambulance, firefighting, emergency, military police, emergency rescue, people’s livelihood security, official vehicles and other special vehicles with special signs can pass through the emergency passage. Please select other time slots for commercial and supermarket cargo delivery vehicles to enter the controlled area. (Finish)