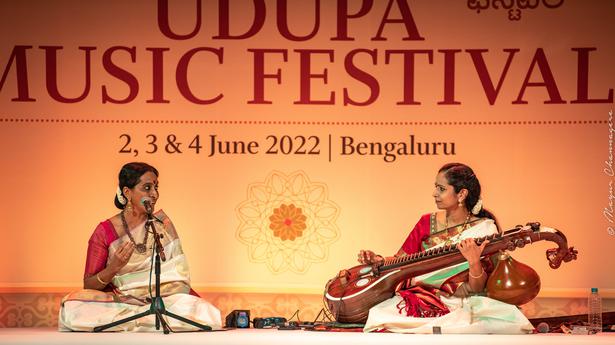 Girdhar Udupa is an exponent of the ghatam, that is accorded the status of an upa pakkavadhyam (secondary accompanying instrument) in Carnatic music concerts, but the bi-annual festival launched by the young musician four years ago is among the finest in the country. The three-day event usually presents Hindustani, Carnatic and fusion performances and sees a huge turnout despite being ticketed.

The fourth edition of the festival was held recently at the Chowdiah Hall, and opened with the percussion ensemble comprising Pt. Yogesh Samsi on the tabla, Mattanur Sankarankutty Marar on the chenda, and Bengaluru Amrit on the kanjira. An unusual combination, it was interesting to see how each instrument conveyed the same theme differently. Percussion has always occupied centre stage at the event, where greats such as Zakir Hussain, Umayalpuram Sivaraman and Karaikudi Mani have performed earlier.

Next was sarod maestro Ustad Amjad Ali Khan’s performance. The veteran musician paired up with an old associate, Pt. Kumar Bose, to present a leisurely concert, featuring his favourite raags including Durga, Khamach, Rageshwari, and Mian Malhar. A highlight was his singing, in full, a tarana composed by him in Bahar before playing it on the sarod.

The second day featured senior vocalist Bombay Jayashri and veena exponent Jayanthi Kumaresh, a popular combination, both having been trained in the Lalgudi tradition. They created magic with their seamless flow of musical thoughts. An unusual, heart-warming piece was the pallavi they both had jointly composed in raag Bihag, Adi taal, with the lyrics ‘Udupa vadana Shri Krishna Gopala Giridhara’, in praise of Giridhar Udupa, who was moved by this gesture.

Indeed, musicians turning curators seem to do a better job than event organisers. Giridhar joins the fairly long list of musicians, who have organised music festivals. At this edition, there were two such musicians. Ustad Amjad Ali Khan in the 1970s and 1980s organised the Ustad Hafiz Ali Khan Memorial festival. It used to be held in Delhi, Mumbai, and Kolkata (for an amazing 13 days). Yogesh Samsi for the past 15 years has been organising the Dinarang Smriti festival in memory of his singer-composer father, Pt. Dinkar Kaikaini, in Mumbai. While festivals organised by musicians are usually to commemorate a guru, Giridhar’s motivation is somewhat different.

Giridhar’s father, Ullur Nagendra Udupa, a Yakshagana artiste, always wanted to learn the mridangam but did not get the opportunity at his native village in North coastal Karnataka. So he moved to Bengaluru. His realisation that opportunities to learn and also to listen to artistes live was important made him start a music school in 1975.

Giridhar took up the task of widening the reach of music by taking it to old age homes, schools, and remote villages of Karnataka. “But I don’t have the money to achieve my dream. My festivals are a means to raise funds. They are sponsored and totally driven by ticket sales. The culture of listening to classical music in India should change. Why should people expect free music? I keep the ticket prices high since I aim to provide the best. Sometimes organisers and event management companies don’t have a feel for audience expectations. Musician-organisers know what the fellow artistes want, and what chemistry can be created with whom.” For instance, the last day’s concert featured solos by Louis Banks and Sivamani, and a group performance (incidentally, an addition was the spontaneous jamming on stage by Girdhar and Sivamani).

Udupa Festival has also been conducted in Denmark and Poland. But having editions of the festival in other cities is not easy. Giridhar says it takes too much time and being a busy musician he can’t cope. He has already booked Chowdiah Hall for 2024 and is planning the artiste line-up.