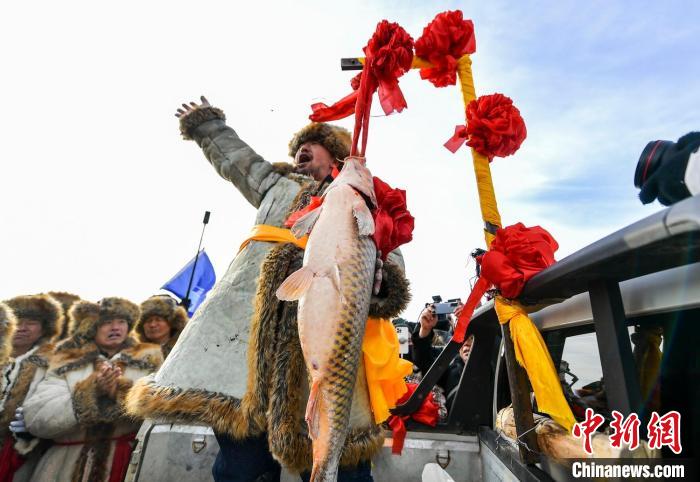 Before dawn, fishermen braved the low temperature of more than 30 degrees below zero on the ice surface, and put the thousand-meter king through the lower mesh into the frozen lake.Photo by Liu Xin

“Fish out!” With the loud shout of “fish head”, the snow-covered Ulungu Lake began to boil. After five or six hours of cooperation by dozens of fishermen, the 2,000-meter-long subglacial net was slowly pulled out under the traction of the winch machine.

“The head of the fish” Zhang Haijiang hung the head fish on the car and transported it to the head fish auction site.Photo by Liu Xin

Northern pike, Baikal crocodile, oriental bream… glowing wild fish in Ulungu Lake are jumping and jumping with the thousand-meter net, and the tourists onlookers applaud and shout from time to time, and they can’t wait to hug The big fish took a group photo, completely forgetting the biting cold on the ice.

Inheritance and development of winter fishing and hunting culture

Pulling the net on ice is a traditional winter fishing method in Ulungu Lake, Fuhai County, Altay Prefecture, northern Xinjiang. During winter fishing, the ice layer on the lake can be more than 1 meter thick, and the snow on the ice can be as thick as 30 centimeters. Fishing in this environment and conditions is vividly called “walking on the snow to find fish”. Every year in early November, Ulungu Lake begins to freeze, and December to March is the fishing season. Frozen three feet, digging ice for fishing, dozens of people work together, ten thousand fresh fish jump out of the ice, with dazzling scales, it is spectacular and highly ornamental. 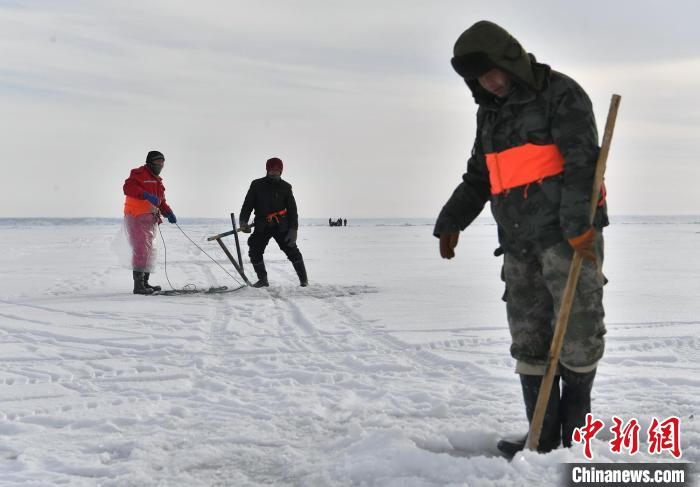 During winter fishing, the ice layer on the lake can be as thick as 1 meter, and the snow on the ice area can be as thick as 30 centimeters. Fishing in this environment and conditions is vividly called “walking on the snow to find fish”.Photo by Liu Xin

With a water area of ​​1,035 square kilometers, Ulungu Lake is one of the top ten inland freshwater lakes in China. It is known for its “Gobi sea” and the delicious “Fuhai wild fish”. As the largest natural fishery base in northern Xinjiang, Ulungu Lake is a pure and pollution-free lake, rich in 23 kinds of cold-water wild fish such as northern pike and oriental bream. In addition to sightseeing, tourists can taste the whole fish feast with excellent color, aroma and taste. It is an excellent experience to enjoy the beautiful scenery and taste the fish soup.

Winter fishing in Ulungu Lake has a history of more than 60 years, and the highest record was 83 tons of fish in one net.Photo by Liu Xin

“The head of the fish” Zhang Haijiang is a native of Fuhai County. He is also a typical “second generation fisherman”. He has been fishing with his father in Ulungu Lake since he was 17 years old, and later opened a fish restaurant. Wang Haijiang, who has many years of experience, introduced to reporters in detail the detailed process of fishing with large nets on the ice of Ulungu Lake.

The most complicated thing in the winter fishing process is the pulling of the net. Depending on the fishing range and the amount of fish produced, the entire process of pulling the net on the ice can be as short as 5 hours and as long as 7 or 8 hours. 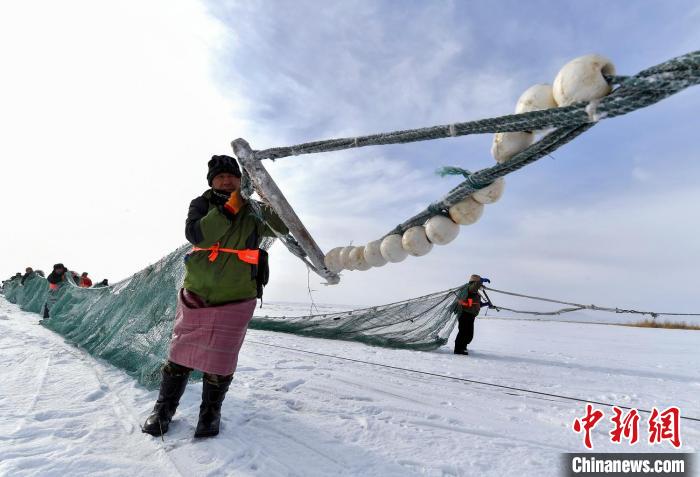 At 8 o’clock in the morning, the sky was full of stars, and the fishermen had already appeared on the ice at minus 30 degrees. According to the conditions of the ice layer, the “fish head” marks the fishing range with red flags on the ice. Then the fishermen used ice piercers (ice drilling tools) to cut a rectangular lower mesh about 2 meters long and 1 meter wide on the ice. The thousand-meter net is launched into the water from here and unfolded little by little.

The fishermen are divided into two groups, with the lower mesh as the center, and according to the calibrated fishing range, at intervals of about 15 meters, a hole with a diameter of about 20 centimeters is cut on the ice surface, which is used for piercing rods under the ice (under the ice) According to the size of the fishing range, 180-200 ice holes ranging from 180 to 200 need to be drilled, and finally a fishing area of ​​about 3 square kilometers will be enclosed.

Every 15 meters or so, the fishermen cut an ice hole with a diameter of about 20 centimeters on the ice, which is used to go through the pole under the ice.Photo by Liu Xin

While digging the ice hole, the fishermen insert the piercing rod through the lower mesh, and then fix the direction with a button (a tool used to grasp the direction of the piercing pole) and then use a hook (a tool used to thread the pole forward) to go under the ice. After passing, the thousand-meter net also slowly entered the ice with the pole.

On the cold ice, fishermen use buttons to adjust the direction of the rod under the ice.Photo by Liu Xin

The process of walking the rod is urgent. When the rod passes through each ice hole under the ice, the fisherman must use the button to adjust the direction of the rod, and then use the hook to push the rod forward under the ice, and the rod will be pushed forward. The waterline at the back draws out the ice surface, or manually or using a winch machine, to slowly unfold the thousand-meter-long net under the ice. This seemingly simple process is not simple on the freezing ice. It requires the rich experience and high cooperation of fishermen. If there is a problem in one link, the next process needs to be waited. will also continue to be extended.

After several hours of pole walking, the under-ice piercing pole finally surfaced from the exit mesh, and the netting was completed at this point, and the thousand-meter net had been closed under the ice. At this time, the sky was bright and the temperature rose slightly. With the completion of the process of digging ice holes and walking rods, the fishermen slowly gathered near the outlet mesh, chatting and laughing with each other, took out the food they carried, and ate the hot milk tea in the thermos. It is very important to replenish physical strength on the surface in time. 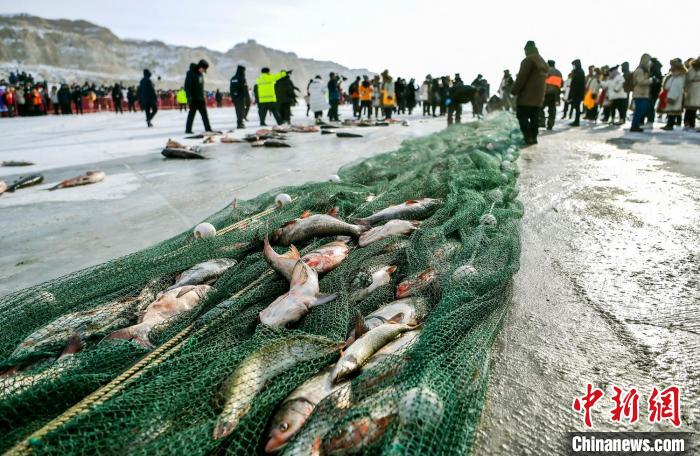 After several hours of close cooperation by dozens of fishermen, the wild fish in the lake floated out of the ice along with the thousand-meter net.Photo by Liu Xin

The most spectacular and exciting thing is to count the net. Under the traction of the winch machine, more than a dozen fishermen on the left and right lined up and yelled, and slowly pulled out the steaming large net, like a rolled-out railroad track, carrying the fish just out of the water, extending to the Sixty or seventy meters away. With smiles all over their faces and eyes, the fishermen shook out the fish hidden in the big net. After a while, the ice surface was full of jumping and shiny fish, including northern pike, silver carp, oriental European bream…the fish were quickly loaded into trucks and transported to a nearby live fish point for further sorting.

In the process of fish production, the unformed small fish will be gathered into the lake and released in time, “catch the big and let go of the small” to ensure the continuous growth of wild fish species in the lake.

Depending on the scope of fishing and the amount of fish produced, the whole process of pulling the net on the ice can be as short as 5 hours and as long as 7 or 8 hours.Photo by Liu Xin

The large-scale fishing on the ice in winter has become a feature of Fuhai, and thus the Winter Catch Festival was born. Since the first Fuhai Winter Fishing Festival was held in 2005, after many years of operation, it has now been held for 16 consecutive sessions and has become a “unique” business card for winter tourism in Xinjiang. Every year during winter fishing, tens of thousands of people come to watch the festival. While enjoying the spectacular scenery of large-scale winter fishing, enjoying ancient fishing methods such as sacrifices to the lake and waking up nets that have been passed down for generations, at the same time, taste the big pot of fresh fish and sheep soup, and experience the endless fun brought by ice and snow.

In order to cultivate the brand of “Winter Fishing Festival”, Ulungu Lake has implemented large-scale artificial breeding and release of fish since 2004, which has formed an effective protection for the fishery resources and ecological environment in the lake area. The establishment of a high-quality native fish fry breeding base, the deep processing base of aquatic products, and the construction of freezers and cold storages are also actively followed up. Fishing and aquaculture links are becoming more and more perfect, and the ecological fishery industry chain is also extending and enriching.

Driven by the Winter Fishing Festival, the local “hot’snow’ boils”, and the rapid development of winter tourism makes “cat winter” become “busy winter”. Walking in the streets and alleys of Fuhai County, the red lanterns reveal a festive and peaceful atmosphere. The business of restaurants on the street is also booming, and you can taste the authentic local wild fish feast when you walk into any fish shop or farmhouse. Akewutikele Village, Kuokeagash Township, 8 kilometers away from Fuhai County, is a well-known folk village in the local area. Whenever tourists stay in the folk village, the villagers will wear ethnic costumes to interact with tourists from all over the world, sing and dance around the bonfire in the ice and snow, eat barbecue and drink mutton soup, and feel the unique charm of the Kazakh folk village. (Finish)