What is the difficulty of the “particle ink” technique used in “Deep Sea”?

To talk about particle ink, first of all, we cannot avoid the art director of this film who created this painting style: Zhang Yu.

Zhang Yu’s Chinese-style painting style that combines ink and rock colors is very unique. This style of painting has strong rendering power, bright colors, and the tension and freedom of ink and wash. Every movie poster she writes is the most attractive existence. Therefore, there are not a few films that have cooperated with her, and they have certain influence in the film and television industry.

With this unique style of painting, many directors have hoped for animation ideas from a very early stage, including real film directors, 2D animation directors, and Tian Xiaopeng, the director of “The Great Sage” and “Deep Sea”.

I am not talented. I have cooperated with Zhang Yu on a project around 2018, which is the animated ink and rock color. I was the partner. The leading party at that time was a 2D animation team. Our main task was much simpler than that of the deep sea. It is to move the painting smoothly. The first problem I encountered at the time was that all of Zhang Yu’s paintings were on paper, and drawing a version of the illustration was a complete painting without any layers, which meant that we couldn’t help us draw it like a digital board painter. After dismantling each part, it’s okay for us to disassemble and complete later. However, Zhang Yu’s paintings have a lot of color smudges, the intersection of colors and soft things, we can only There is no better way to forcibly disassemble and destroy. It even includes color-to-color coverage and occlusion, etc. Cannot be restored. I remember that in order to cooperate with the animation team to make animations, Zhang Yu drew and scanned the parts of the whole painting that needed animation and could not be disassembled. For some parts, such as fluttering clothes, flying hair, etc., the 2D team imitated Zhang Yu’s brushwork and style, and drew stop-motion animations one by one to complete the animation of this painting style.But the ending, at most, is to make some micro-movements of the complete painting, at best, it is to distance the layers and do some small camera movements. As for the particles of ink, the color fusion of rock colors, and even the flow of colors Dissipate, there’s really nothing we can do

The efforts of “Deep Sea”:

In the experiment of the deep-sea crew, various paints were used to splash and flow. In addition to restoring the color of the rock color, it is also necessary to have a suitable sense of flow and fusion.
Even if the final material obtained from this kind of shooting and experimentation achieves the desired texture, it is difficult to obtain the desired shape and dynamics.

The original idea was to paste the captured material as a texture on the surface of the model in a specified shape, but the clear edges of the 3D model and the blurred boundaries of ink and ink formed an opposition

Flowing images, blurred borders, and slightly defined shapes, so particle effects are the best choice for this effect.

In fact, “Deep Sea” is not the first time to use particles to make ink wash. For example, the memory screen in the movie “Harry Potter”, where black smoke special effects form houses and streets, is the prototype and original reference of various domestic ink wash special effects. But these are only black and white. Even if the color changes to multiple colors, the colors are mostly presented in a smoky sense, and the colors are not related to each other. 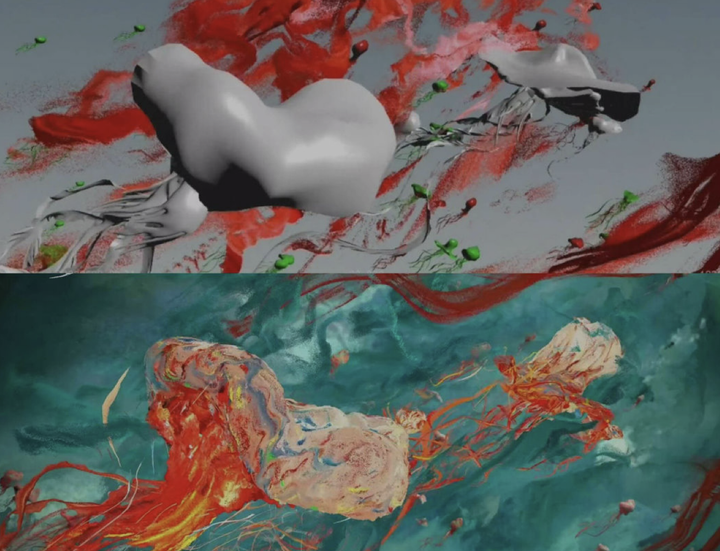 What the deep sea completes is that the animation character itself is formed by large particles, and the colors are mixed, and the boundaries interfere with each other but do not merge (for example, note that the octopus whiskers contain yellow, red, and deep red). After the particles are disturbed, they affect the entire picture like a liquid (such as an octopus. The disturbance to the background picture after swimming, and the change of depth) all completely conform to the free and easy brushstrokes and mutual influence in ink painting, and fully retain the color of the rock color and its grainy texture, which perfectly interprets the real animation. Chinese painting style.

In addition, for example, each part of “Harry Potter” is composed of particles, and the background is still the background of the shooting, and the deep sea, such as the above shot, the entire picture is derived from particles, that is to say, the particle collision between the animated characters , The background also participated in the calculation of the entire particle in order to complete the texture of the picture, and the workload was several times that of others.

All in all, I don’t think this particle ink is a big breakthrough in terms of technology. Experts who specialize in particle special effects can quickly guess the production method, and this style of painting will soon see imitators appear. But the important thing is that everyone uses the same technical means. “Deep Sea” is the first to perfectly interpret such a unique picture, and as the leader of the latecomers, this is the meaning of this technology to realize this picture.

[Zhihu Daily]The choice of tens of millions of users, to be a big cow in the circle of friends to share new things.
click to download

There is 1 answer to this question, see all.
Further reading:
The number of particle special effects in “Deep Sea” is as high as 2 billion. What kind of impression will the “particle ink” technology bring?

What are your expectations for the particle ink technology used in the visual effects of the movie “The Deep Sea”?