What topics did Xi Jinping and the President of the Philippines discuss when meeting foreign guests for the first time this year? – Chinanews.com 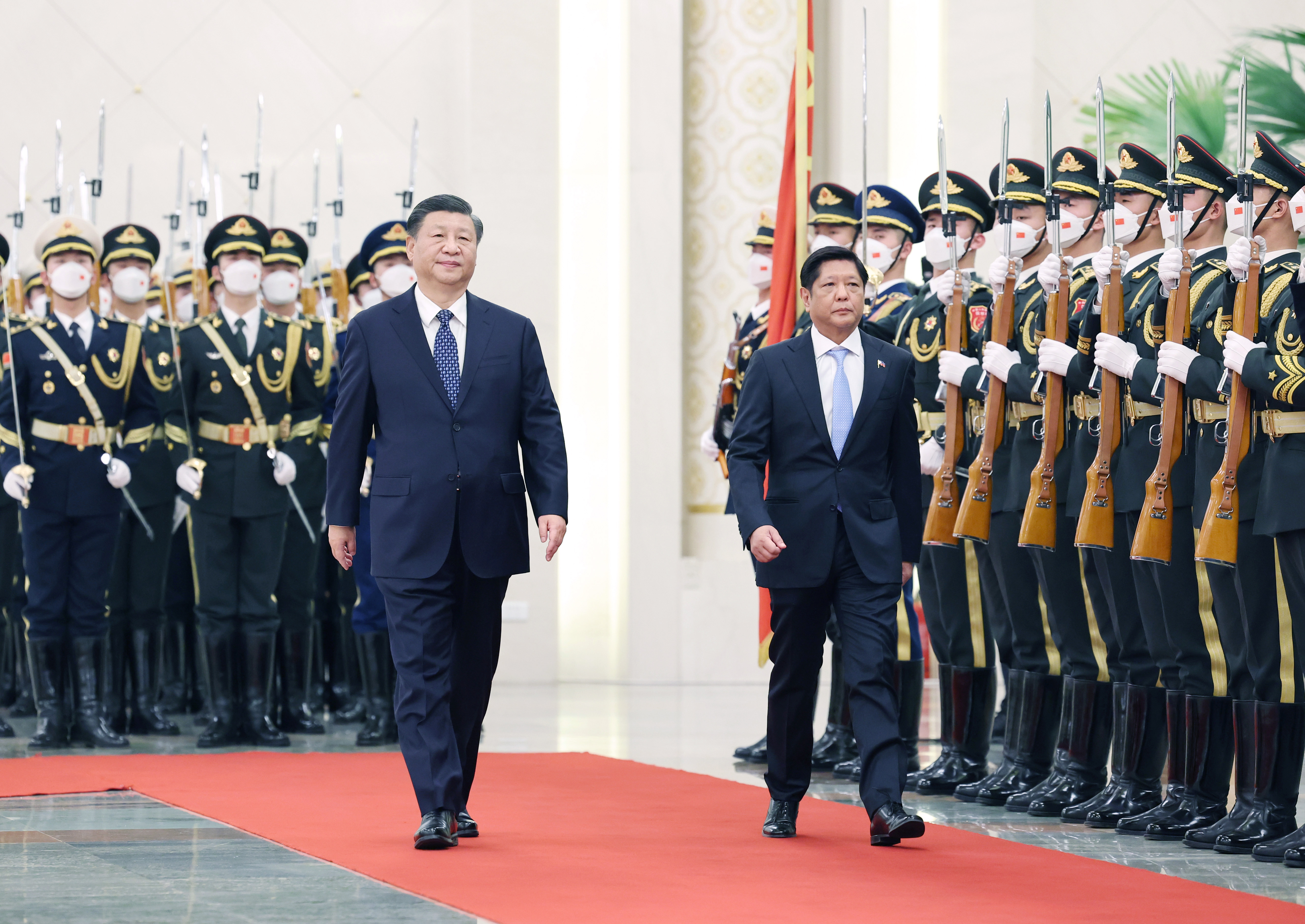 Hookup+｜What topics did Xi Jinping and the President of the Philippines discuss when meeting foreign guests for the first time this year?

“This is your first official visit to a country outside ASEAN, and you are also the first foreign leader received by China this year.” On the afternoon of January 4, President Xi Jinping held talks with Philippine President Marcos, who was on a state visit to China, in the Great Hall of the People. When meeting foreign guests for the first time this year, what topics did Xi Jinping discuss with the President of the Philippines? CCTV’s “Lianbo +” column sorts out the content of the talks for you.

“First” and “first” diplomacy is of great significance

●Since Marcos became the President of the Philippines in June last yearfirstVisit to China, this is also since he took officefirstOfficial visit to a country outside ASEAN.

President Xi Jinping welcomed Marcos’ first visit to China after taking office as Philippine president. President Xi pointed out that this fully reflects the closeness of China-Philippines relations, and also shows that the two sides occupy an important position in each other’s diplomatic structure.

Thousands of years of friendly exchanges and friendship are precious

●Forty-eight years ago, the father of the current Philippine President Marcos and the older generation of Chinese leaders had insight into the current situation and complied with the general trend, and jointly made the historic decision to establish diplomatic relations between China and the Philippines.

President Xi Jinping pointed out that China and the Philippines are close neighbors separated by a narrow strip of water. In the thousands of years of history of exchanges between the two countries, treating each other with sincerity and helping each other has always been the mainstream of China-Philippines relations, and it is also a precious spiritual wealth shared by the two peoples.

Good neighbors, good relatives, good partners, working together for the well-being of the people

●China always puts the Philippines in the priority direction of its neighborhood diplomacy, and insists on viewing China-Philippines relations from a strategic and overall perspective.

●China is willing to doGood neighbors who help each other, good relatives who know each other well, and good partners who cooperate and win-winbringing more benefits to the people of China and the Philippines, and contributing more positive energy to regional peace and stability.

President Xi Jinping said to Marcos that he hopes that your visit to China will not only be a “journey of nostalgia”, but also a “journey of pioneering”. I am willing to maintain regular strategic communication with you, and comprehensively plan the next stage of development of bilateral relations. 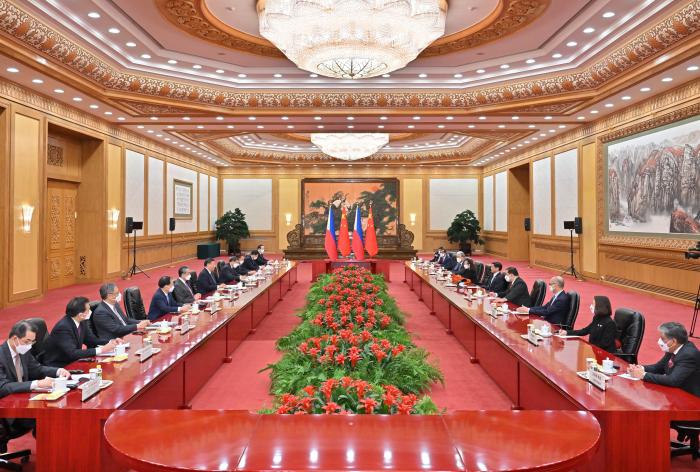 △On January 4, President Xi Jinping held talks with Philippine President Marcos, who was on a state visit to China, at the Great Hall of the People in Beijing.

China is comprehensively promoting rural revitalization and speeding up the construction of a strong agricultural country. China is willing to help the development of agriculture and rural areas in the Philippines, build an agricultural technology center brand project, carry out cooperation in the entire industrial chain of breeding, production, processing, and storage, and accelerate the promotion of Juncao cooperation.

The two sides should deepen people-to-people and cultural exchanges in all aspects, expand cooperation in basic education and vocational education, and explore innovative cooperation in fields such as meteorology and aerospace.

President Xi Jinping emphasized that although China and the Philippines have different national conditions and different systems, they have similar goals and similar paths in the pursuit of development, and there is huge potential for cooperation. The two sides should strengthen exchanges and mutual learning between government departments, legislative bodies, and political parties of the two countries, deepen the docking of development strategies, integrate and promote each other in their respective modernization processes, and better help the development and prosperity of the two countries. The two sides have established four major areas of cooperation in agriculture, infrastructure, energy, and people-to-people and cultural exchanges. These are the four beams and eight pillars supporting the comprehensive strategic cooperative relationship between China and the Philippines. We must make great efforts to cultivate growth points and create new highlights.

China is willing to focus on cooperation and development with the Philippines and other ASEAN countries, maintain the centrality of ASEAN in regional cooperation, promote the construction of the “five major homes”, and help the region get rid of the shadow of the Cold War, avoid confrontation between camps, and continue to become a highland for development and prosperity.

The Philippines supports global development initiatives and global security initiatives, and is willing to work with the Philippines to increase mutual support, safeguard the common interests of the two countries and developing countries, promote the common values ​​of all mankind, promote the building of a community of shared future for mankind, and contribute to the improvement of regional and global governance. Make a positive contribution.

Xi Jinping emphasized that both China and the Philippines are developing countries in Asia, and our development is rooted in a good-neighborly and friendly surrounding environment, as well as in the big Asian family of win-win cooperation. 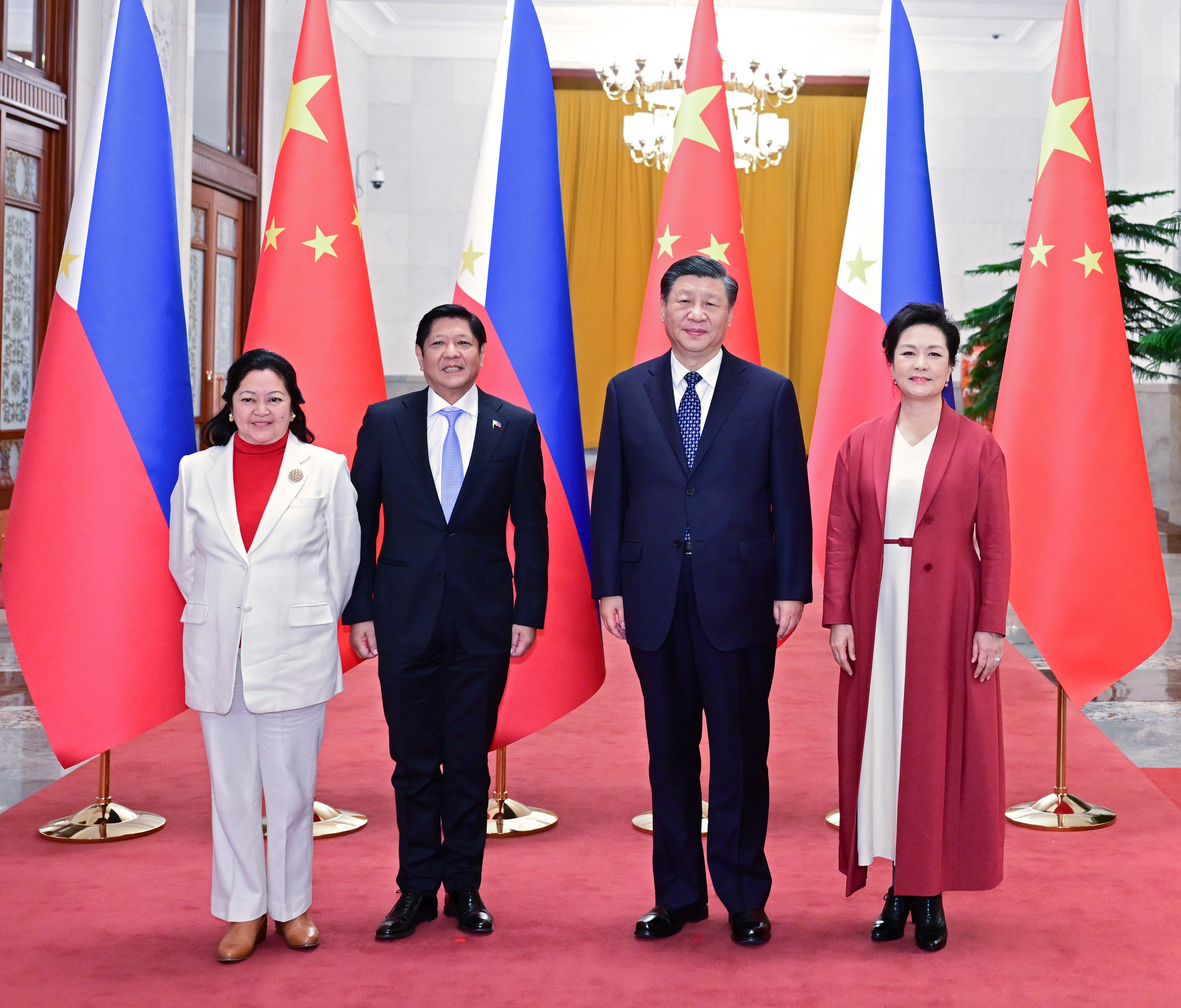 ●Continue to promote the traditional friendship between the Philippines and China

I look forward to maintaining close communication with President Xi Jinping, strengthening cooperation in all aspects, opening a new chapter in the comprehensive strategic cooperative relationship between the Philippines and China, and better cooperating to solve the challenges and problems faced by the two countries, to better benefit the two peoples, and to promote the development of the region. Make new contributions to becoming an important engine of the world economy again.

The Philippine side is willing to tap the potential with the Chinese side, continue to enrich the connotation of bilateral relations, and deepen cooperation in agriculture, infrastructure, energy, humanities, trade, investment, technology, digital economy and other fields.

●Looking forward to closer exchanges between the two peoples

It is expected that after the epidemic, more Chinese people will travel to the Philippines for tourism and study, and the people of the two countries will have closer exchanges, laying a more solid foundation for the long-term development of bilateral relations.

Share
Facebook
Twitter
WhatsApp
Copy URL
Previous article
Direct attack: Beijing-Guangzhou Railway “Steel Warrior” plays the “Symphony” of track-changing in the cold night-Chinanews.com
Next article
East-West Questions | Yi Hua: “West wind spreads to the east”, how can human beings get out of the “Bronze Road” in the communication between the East and the West? – Chinanews.com