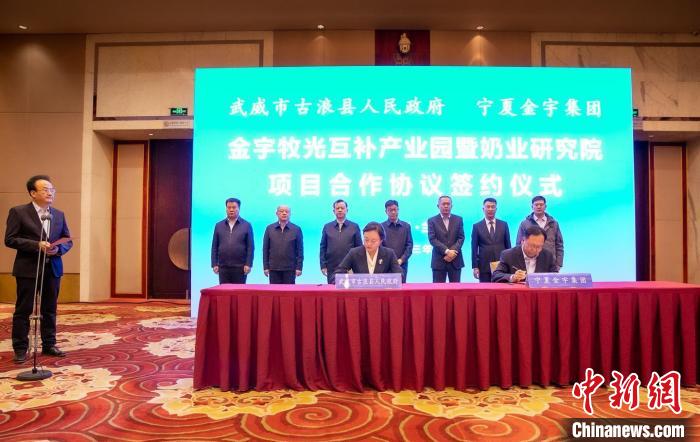 Chinanews, Lanzhou, January 14th (Xu Xue) The official of Gulang County, Wuwei City, Gansu Province and Ningxia Jinyu Group signed a cooperation agreement on the construction project of the Muguang Complementary Industrial Park and Dairy Research Institute in Lanzhou. Dairy capital” and a major initiative of the 10-billion-level golden milk source base in the Hexi Corridor.

Liu Peng, secretary of the Wuwei Municipal Party Committee, said that Wuwei is located at the foot of the Qilian Mountains, with a dry climate, abundant sunshine, pure water sources, and abundant pastures. It has unique advantages and conditions for the development of the dairy industry.

According to reports, Ningxia Jinyu Group plans to invest a total of 8.2 billion yuan in the construction of Jinyu Muguang Complementary Industrial Park in Gulang County. After the completion of the industrial park, the number of cows entering the park will reach 75,000, with a daily output of 1,500 tons of fresh milk, which can attract local people nearby. More than 2,000 people have been employed, and surrounding farmers have been driven to plant more than 300,000 mu of forage grass.

“In 2020, Jinyu Group will build a dairy farm with 20,000 cows in Gulang County. On this basis, we will continue to invest in the construction of an animal husbandry and light complementary industrial park and a dairy research institute in Wuwei.” Jin Ronghua, general manager of Ningxia Jinyu Group, said. Also attracted by the local business environment, the group will concentrate all its efforts to develop the dairy industry and help the local economic development.

Liu Peng said that Wuwei City will speed up the creation of a more attractive, competitive and dynamic business environment, stand together with Jinyu Group, want to be together, and work together, and spare no effort to provide greater support for the development of enterprises , Create better conditions and create a better environment. (Finish)